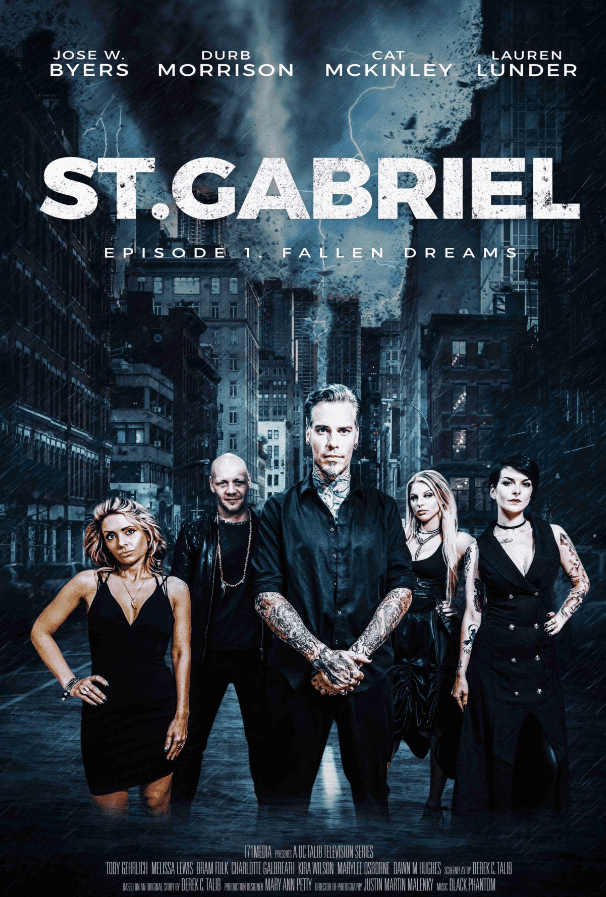 INTERVIEW WITH DEREK TALIB OF I71 MOVIES ABOUT THE OFFICIAL RELEASE OF THE SUPERNATURAL THRILLER TV SERIES ST. GABRIEL, THE CAST, PRODUCTION, AND MORE !

St. Gabriel is a Supernatural Thriller TV Series produced by I71 Movies and created by writer, director and producer Derek Talib! Read our exclusive interview with Derek Talib as he talks about the TV Series St. Gabriel, the cast, the release and more below:

Q: You describe St. Gabriel as a supernatural thriller.  A series you created that has a lot of components and layers to it. Can you give us some insider details on what is the series is about?

Derek Talib – A:  St. Gabriel is about two detectives Abraham Kane and Phillip “Philly” Lawless who take a case that puts them in the middle of the city’s syndicate, neo Nazis, a supernatural underground and fallen Angels. Even though the series is a supernatural thriller it will focus a lot on the interpersonal relationships of the main Characters.

When I write I feel that it is important to build upon the interpersonal relationships. An audience will not care about your story if they don’t care about the people. It is as much a love story as it is a thriller. Four of the characters grew up together and their paths went different directions, which led to tragedy in their lives.Their pasts are filled with complex twists. They try and piece their lives together not knowing they have a higher much more important purpose leading to the gates of heaven and hell.

Q: Derek, what inspired and led you to create the television/web series St. Gabriel?

Derek Talib – A:  St. Gabriel’s origins began in college when during finals week we thought what would be better than to film a 1940s detective story, lol. One of my best friends Michael Fisher and I created a detective story entitled Lawless and Kane.   When I wrote St. Gabriel, I wanted to keep the name of the two main characters to pay homage to the original story Mike and I wrote. St. Gabriel has nothing in common with the original story other than the names of the two main characters.  The story has morphed to a supernatural and demonic thriller that is full of characters and storylines. I have a love of the film noir and I want this to have that feel. The more I wrote the more it took on a life of its own and is such a layered and twisty piece of work. I call it Game of Thrones with Guns.

Q: You are a big advocate of diversity in film and have built i71movies with your best friends and your brother. Tell us how that partnership worked in bringing St. Gabriel to life.

Derek Talib – A: Jose W. Byers believed in the story from the onset. He is my road dawg and best friend. I call him the son my father forgot to tell me about. He is more family than friend. Rebekah Hart Franklin came onboard by her hard work ethic and vision. My brother Allan handles a lot of the business of doing business. We have the right mix of vision, work ethic, love and commitment and are pouring it into this project. We all work hard with i71movies and also have our own projects too. We are like the Avengers. Whenever one of us says i71 Assemble  we come running to do the job and crush it. We root for each other on our individual projects, but our heart is in i71movies and St. Gabriel is our foundation project that brought us together so it is satisfying for us to complete it.

Derek Talib – A:  We like to work with strong indie film actors as well as mainstream actors. One of our lead actors and company co-owner is Jose W. Byers has worked on films  like I am Wrath, Captain America the Winter Soldier, and was the lead in our film Dark Iris.  He is perfect as one of the leads because he brings an edge to the character Abraham Kane with a humanness and warmth.

Director and actor Tim Novotny known for a host of edgy underground horror films like Vile Prey and Phariseeportrays Tom-Tom Kelly who is caught between loyalty to his friends and being a Capo in the St. Gabriel Syndicate.

Tim is an intense actor who is a chameleon of a character actor.

When I needed someone to play self-absorbed and twisted actor and writer Kevin Winstead was the right mix. Kevin is great at playing complex and sinister as Micky Murphy the black sheep of his billionaire family. Kevin is a utility knife as an actor. Jose and I met on the set of an indie film and I worked on.

Rebekah Hart Franklin from Ice Cold killers, Dark Iris, and Strings was the only one I would consider playing Bea Quinn. Bea character is made up of the three “S’s” strong, sensuous, and sensitive.

As a Director I must trust my artist and that is the relationship I have with Rebekah I trust her with my work. We will consult about what underlying emotions the character must portray.

I am also working with Directors like Bram Fulk who is going to play the other lead Philly Lawless, Adam Clevenger who plays Detective Steven Massey and new director Max Kaplan.

As we do other episodes, they will sit in the directors’ chair at some point. I also brought in the talented London Grace to play “Annette” who is the owner of the detective agency, who has several secrets. She is a wonderful actress and producer coming off her successful faith-based film project Finding Grace.

I love underground artist like scream queen Brittany Blanton from She Burns in Hell and Death Care. We even have the top tattoo artist in the world Durb Morrison playing a role that fits him like a glove, Lucifer (No offense Durb lol). He is a natural on screen. We even have two Suicide Girls in the pilot. Certain people are made for film and Lauren Lunder, Cat McKinley seem to pop on camera.

At i71movies we like to create a family feel. Our crews and actors are family to us. Once you work with us you will always find work with us.

Q: Are there any characters we should look out for that you want to give a shout out?

Derek Talib – A:  There are characters that I simply love like Blowfish and Jade, who run the local bar played by Brian Ellis and Mary Ann Petty. Blowfish and Jade are like an old married couple that know everything going on in St. G. Brian and Mary’s friendship comes across on screen.

Ginger  is a prostitute is portrayed by Marylee Osborne who is like my sister. Ginger was not always a prostitute and circumstances put her in this life.  Marylee plays her exactly as I envisioned. We were lucky to get Dawn Marie Hughes to play a complicated role caught between possession and savior. She is a such an underrated actress with impeccable timing.

The subplot I love is the rivalry between two of my villains Greco Lawless played by Tom Basso and Winston played by Brian Bowman.

Greco is a leg breaker for St. G’s crime family and Winston is the bodyguard with voodoo tendencies of Micky Murphy.  These two actors were born to play these two roles. I get excited writing any scenes for these two.  We have a ton of great artists.

Q: Has the film St. Gabriel been released yet?

Derek Talib – A:  We are going to release this is January of 2021 on Vigil TV an international network as well as talking to other distributors about series placement. We constructed a nice pilot episode setting up the rest of the season. We hope to resume shooting in early 2021 to complete a full season. Covid-19 has put us and other productions behind.

Q: How can we check it out? Do you have any official links?

Derek Talib – A:  To follow us I would go to https://www.i71movies.com/about not only St.Gabriel, but also our other projects.