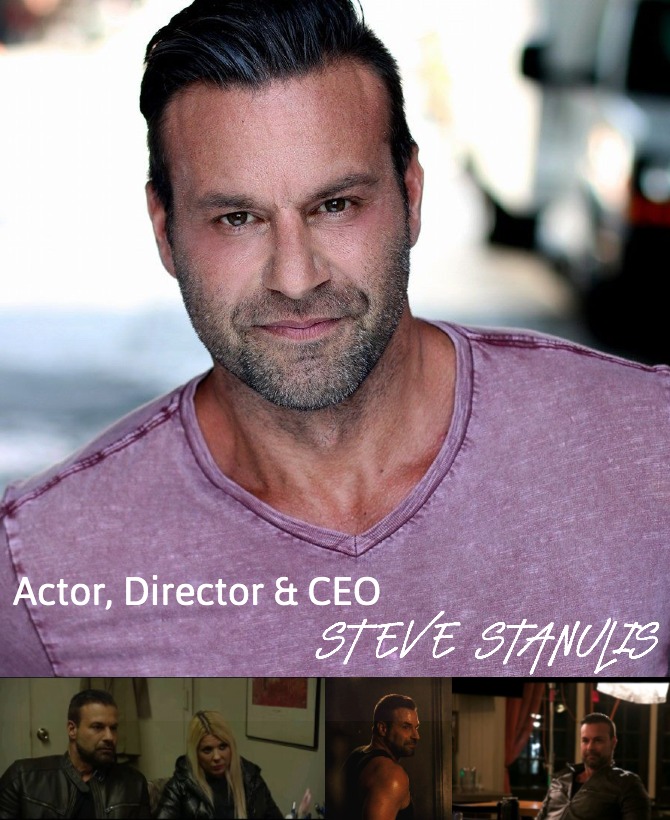 Steve Stanulis is an American Actor, Director, Published Author, CEO of Stanulis Productions, Inc.& Chaos Production Inc, and a former bodyguard to Hollywood’s A List Celebs including Leonardo DiCaprio, Tobey Maguire, Kanye West, and many more! With his many years of experience in the entertainment industry, talent in all aspects of film making and a real-life professional background in crime as a former cop, Steve Stanulis is producing, directing, and acting in some great films that are doing amazing in the film festival circuits and winning many awards! Get to Know More about Steve Stanulis and read our exclusive interview below:

Steve Stanulis – A: I am a native New Yorker, total East coast guy!!! Although I spend a lot of time in LA, NYC is home for me.

Q: Steve, you are an actor, director, writer, and producer also a former bodyguard to Hollywood’s most famous celebrities. With your experience in acting and having rising success in the film industry being booked on multiple features and TV Series including on HBO and Netflix, what do you love most about acting ( auditions, performing, final film premier, all of it) and what really motivates you and inspires you to be the best at your profession?

Steve Stanulis – A: I really enjoy the process of getting into the character and creating a past life of the character prior to where the character’s life begins in the script. Coming from so many unique backgrounds it really helps using a lot of those experiences most people could not pull from. So it really makes for a great imaginary ride!

Q: Do you have a top fav selection of people in the industry ( filmmakers, producers, directors, actors ) you admire and that you want to work with in the future? Do you have any shoutouts for any directors or actors you’ve already worked with?

Steve Stanulis – A: ﻿ I was blessed to work on some amazing projects early on like “The Interpreter” with Sean Penn dir. by Sydney Pollack that one of a kind project really knocked two birds out with one stone! I admire a lot of people from afar, but I’ve learned to judge everyone on a case by case basis. As an actor and director, I’ve worked with actors both that had terrible reputations but were in fact amazing on set and some vice versa. So I kind of hold those I “admire” kind of close to the vest.

Q: You are certainly equipped for action films and you’ve already showcased yourself with Drama winning an award for the film Long Shot Louie! What kind of films do you usually go for and what roles do you most want to expand upon( drama, comedy, crime, a little bit of all)?

Steve Stanulis – A: ﻿ It’s so funny because in real life I am a real ball breaker but I tend to be attracted to psychological thrillers and darker films.

Q: Steve, you also own two successful production companies, Stanulis Productions, Inc. and Chaos Production Inc. with a lot of great upcoming projects! Do you have any new or recently finished projects you can share with us?

We actually were lucky enough to release two films this year! They were originally scheduled to be theatrically released and went on-demand due to the pandemic! We released “5th Borough” which won both “Best ensemble cast” and “Best Drama” in Hells Kitchen film festival literally a week before the pandemic. We released in June “5th Borough” with a great ensemble cast Tara Reid, James Russo, Lillo Brancato, Al Sapienza, Chloe Lang, and Vincent Young to name just a few of the cast.

We also released in October “Chronicle of a Serial Killer” starring DMX, Dominque Swain, Brenden Sexton and it’s doing well on pretty much every platform you can think of please do not make me name them all, LOL.

We are now in pre-production on a new film project called “Red Money”.

Q: Can you tell us something we may not know about you? Any hobbies, passions, or other secret talents you have and or like to do in your spare time?

Steve Stanulis – A: ﻿ I love to consume books, definitely love to spend time with my family, and continue to constantly create, develop, and work on great new original content.