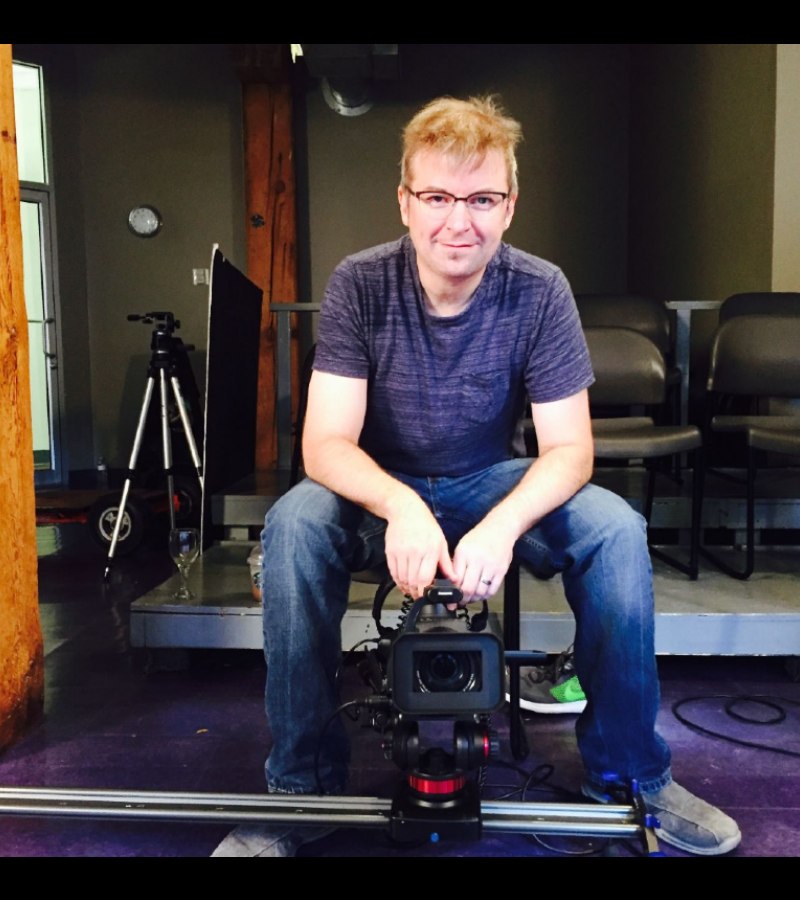 David Tarleton is an Award-Winning Producer, Director, Editor and the co-founder of the 17+ year production company, Tarleton/Dawn Productions. David has done outstanding work in the film industry, he has worked with the top film companies in the industry including Sony Pictures, Syfy Channel, Disney, Fox, Comedy Central, Universal, Warner Brothers, and Showtime! David has some great news on his latest new film developments & more. Read our exclusive interview below with Filmmaker David Tarleton:

David Tarleton – A: I’m originally from Williamsburg, Virginia. I grew up working at Colonial Williamsburg and was an actor there through high school and college. I lived in New York while I was studying film at NYU, and moved to Los Angeles when I started my MFA at the University of Southern California. I was in L.A. for fourteen years, and then moved to the Chicago area, when I was hired as a film professor at Columbia College Chicago, where I’m the head of graduate film programs. I currently live just outside of Chicago.

Q: David, you are an award-winning producer, director, and editor creating programs for premier A-List film companies including Sony Pictures, Syfy Channel, Walt Disney Pictures, Fox, Comedy Central, Disney Channel, Universal, Warner Brothers, Showtime and many more! Can you tell us about some of your favorite projects? What would you say motivates you and inspires you to be the best at your profession and do you have a top 3 selection of entertainment industry pro’s that you want to collab with in the business?

David Tarleton – A: Over the years, I’ve been fortunate to work on so many different projects, both in Hollywood and independently, but I definitely have some favorites.
I produced and directed the award-winning feature thriller, “Hunter.” It’s a supernatural thriller that we shot during the coldest winter in Chicago. It explores homelessness, PTSD, MMA and grief. I’m so humbled by how the fans and critics really embraced the film when it was released.
I also was a producer and director of the television series, “Dark Secrets,” for cable channel 3Net, the 3D channel owned by Discovery, Sony and IMAX. It’s a darkly themed science fiction anthology show. We shot it in stereoscopic 3D, which was exciting but also a real challenge throughout, especially for a TV series.

I was the editor for the Muppets’ series, “Statler and Waldorf From The Balcony,” for Disney, which was kind of amazing. I’ve been a fan of the Muppets since I was a very small child, and getting to work with these legends was just amazing. Then we went on to win the Webby and all these other awards, and got such fan love; it was really something special for me to be a part of.
I feel motivated to tell stories that matter, whether that’s thrillers, socially focused work, comedies – I want to affect people. I feel constantly inspired by other artists’ great work, by my family, and by the world I see around me every day.

Q: David, you are also the co-founder of Tarleton/Dawn Productions, with your wife & talented actress Adria Dawn since 2004. Can you share more about your production company and films produced?

David Tarleton – A: Adria and I were friends first, and really respected the work we saw each other doing. We founded Tarleton/Dawn Productions before we started even dating. I think we’re kindred spirits, creatively, and just love making all kinds of projects together. As a company, we’ve made plays, several series, features, over twenty short films, and music videos.

I produce and co-direct the series “Kids Matter,” with Adria. It’s a series of short films focused on socially relevant issues for kids, like bullying, depression, social exclusion, pressure, cyber bullying and gun violence. They are distributed throughout the world and used educationally in classrooms.

Adria and I have made a number of films focused on social issues, including the Black Lives Matter film “Karen” and most recently, “Gray Area.” It feels so important to tell stories to try to make the world a better place.

I also executive produce and direct “Dorkumentary,” the all-improv comedy series that Adria stars in.

We both have a background in extreme comedy and it is so much fun working together on these, just to make people laugh, including ourselves.

Both Adria and I wear a lot of hats on our projects, and we like to work that way. It’s more fun and we can get our hands dirty at every level of the process.

David Tarleton – A: In my spare time, I mostly try to spend time with my family. My son, Hart, who is 12, keeps impressing me with his game development skills, and I get to be his main beta tester. It’s such a trip to see him growing up, super creative, but taking his own path. I try to help him a little but mostly I just want to see him follow his own bliss. He also rock climbs, which is great fun to watch.

My wife, Adria, and I work together, but we’re also married. She’s kind of amazing, so it’s just wonderful spending time together. I do have to say that because we are both married and creative partners, that sometimes lines do blur around the house, like talking about projects during family dinner.

David Tarleton – A: We just finished making the film “Gray Area,” which I produced and co-directed with Adria Dawn. It’s an adaptation of the memoir “My Self,” by Kelley Kitley, and explores mom wine culture, post-partum anxiety, trauma and addiction. We were going to start production the week after Covid hit in March, 2020, so it felt good to finally get it finished. We’re hoping for a strong festival run.

We are also currently in development of a new psychological thriller feature film, called “Back to One,” with writer Gordon Penn, and are hoping to begin shooting in the near future. I’ll direct and Adria will play the lead; we both will produce. It follows the deterioration of an aging actor, who is struggling to survive in both the entertainment industry and her own mind. I can’t wait to make it and share it with audiences around the world.