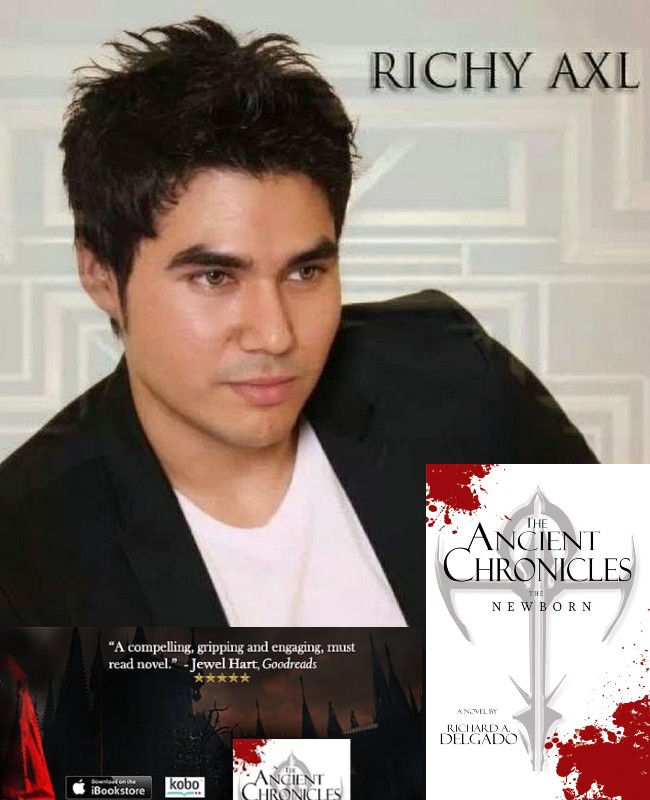 Richard Delago also known as ‘Richy Axl’ is a professional author, artist, illustrator, and founder of the IG Web Comic Series. His latest book series ‘ The Ancient Chronicles’ is loved by readers everywhere and has been rated 5 stars on Good Reads. The book is available both by ebook version and paperback. Read below as we chat exclusively with Author Richy Axl:

Richard Delgado – A: I was born in Monterrey, Mexico. Raised in Houston, TX. Now, I currently live in Greater Los Angeles, CA with my wife. We’ve been here in California for almost 3 years now.

Q:  As professional author, illustrator and founder of the IG Web Comic Series,  what personally motivates you and inspires you to be the best at your profession? Also, do you have a favorite genre in writing?

Richard Delgado – A: I say what motivated me is the people around me. Influential figures in the entertainment industry. Also, in terms of writer I would say authors like Anne Rice, JR Tolkien, and Stephen King. Have inspired me throughout the years to be a fiction writer myself as well.  I really don’t have favorite genre, however I would say fantasy. Because it certainly allows me to write fictional stories that captivate the imagination of so many readers. Thinking out side the box as they say. In writing fantasy the only limitations are your own limitations.

Q: Richard, you are the author of the book series ‘The Ancient Chronicles’. The cover is defiantly piercing and tempting! Share with us some more on what the book is about, the main characters and genre?

Richard Delgado – A: “The Ancient Chronicles: The Newborn” is about a Vampire in the 18th century who struggles with his mortal past, and his immortal future. The story is based on Leonardo and his task to seek vengeance for his family’s massacre. We also, get the opportunity to meet his maker a reckless Vampire named, Boris. It is a dark fantasy book that introduces you to a whole new dark universe which is “The Ancient Chronicles”. There will be more, so stay tune.

Q: Can you give us an exclusive quote from the book ‘The Ancient Chronicles’?

Richard Delgado – A: “If I tell you what I am, not only would you not understand it. But you will run from it”. – Vampire Leonardo

Q: Where can purchase the book online and what are your official social sites on the web we can follow?

Richard Delgado – A: You can definitely purchase a copy at my book’s website www.theancientchronicles.com available in both ebook and paperback formats.

You can also follow my social media accounts to stay updated on my artist career at: