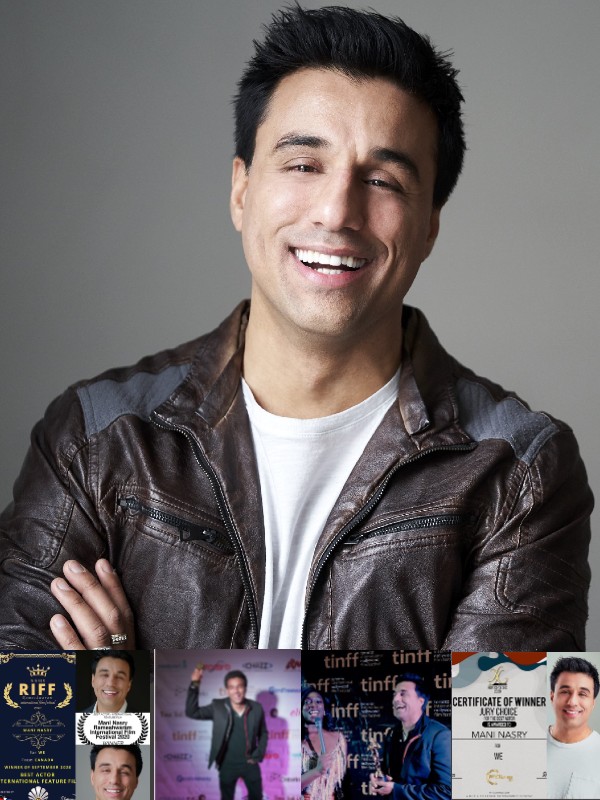 Mani Nasry is a Multi Talented Actor, Producer, Director, and Writer. He has been recognized for his film work winning 60 awards including as ‘Best Leading Actor’ for his film ‘We’! Mani Nasry has a strong drive in the entertainment industry along with meaning and passion behind his work. He is rising to success in the entertainment industry and constantly creating more and more great productions and starring in roles. Read below the exclusive interview with Mani Nasry:

Mani Nasry – A: I am from Afghanistan where empires go to die. We ran away from war and came to Montreal. I am one of the first Afghans in Canada. Afghanistan is a very rich land, for over 50,000 years people have lived there. I currently live in Toronto but I’m heading to Los Angeles. There is more bio information on my website www.maninasry.com

Q: Mani, you are a Multi-Talented Actor, Producer, Director, and Writer continuously making your mark in the entertainment industry from starring In the film ‘ Glow’ ft Portia DE Rossie to having numerous roles lined up as well as with awards such as ‘ Best Leading Actor’ in your first featured film production called We (2021)! All amazing accomplishments! What would you say motivates you and inspires you to be the best in your profession?

Mani Nasry – A: What motivates me is the ability to change the world, one day at a time. To make people feel wanted, needed, cared for, respected, valued, and appreciated. Our film We (2021) gives people of different ethnicity a chance to be the leading characters in a movie. There is a lot of politics and injustice in the industry and that’s one of the reasons I believe we have to create, we have to be the producers, the shakers, the makers of content, and change the narrative. To tell our stories by producing our own content. Yes, it took me 10 years to study acting in New York, Los Angeles, and Toronto, and 5 years to study filmmaking at Ryerson University and another 5 years to make the film but the message is important to the world. The film We (2021) breaks barriers between two countries and unites us even though we might be of different religions, backgrounds, or skin tones. What matters is that we are one, we are united, and from the same source. What we do to others we are only doing unto ourselves. Let us be kind and gentle to one another. All we need is our two hands to help others, to serve, to lift others up, to give hope to others, to smile in order to make them feel good about themselves, we are one family helping each other stand strong and tall. You are a great achiever, a great accomplisher, your outstanding and brilliant, don’t let advertiser or media tell your not good enough, they are only selling their products. Within you there is determination, perseverance and hope to do all you want to do. Must always focus on your goals, dreams and objectives for the day.

One day at a time, one stone at time and work on every move excellently. Never give up, never, never give up. All you have to do is change your thoughts to being positive and optimistic at all times and be consciously aware of any evilness coming in, and we can and will do all we want to do if clean up and purify our minds and make sure nothing negative or pessimistic enters in. Be consciously aware and alert at all time. The key is to focus on the goal and not the obstacle at hand. Make little moments matters, put extraordinary efforts in it. Sweat. Never hurt anyone, never pain others, never hate because what we send out, comes right back. Everyone is fighting some battle, so make it easier for them. To love them, appreciate them, be kind and good. We are here to do good deeds and make the life of every human being easier. You are the improver. Change the ending. Think for yourself, set your own goals and stop achieving the corporate dreams, you choose how to respond to every person and situation. I am responsible. Love yourself and value yourself, you are very important. Don’t listen to people’s negative opinions of you, it’s what they think of themselves unless it positive and good. Only allow the good to settle in your mind because what we put in our minds become our reality.

Q: Do you have a selection of top 3 favorite actors, filmmakers or directors that you admire and want to work within the business?

Mani Nasry – A: I was saying the other day, I would love to work with Warner Brothers. I am always excited when I see their logo. Steven Spielberg because he got me into the film industry. I love David Fincher Tim Burton, Christopher Nolan, Ridley Scott, J.J Abrams, and Robert Zemeckis.

Q: As an actor what would you say is your fav genre in roles you play( Drama, Comedy, Action, a little bit of all) ?

Mani Nasry – A: I mainly focus on Drama but God knows how amazing I would be at comedy. Action would be so much fun but it’s not cheap to do action films.

Q: Share with us something people may not know about you . What hobbies or other secret talents you have and or like to do in your spare time aside from filmmaking?

Mani Nasry – A: People reading this doesn’t know that I was the best student in high school almost every year. I have made every sports team such as archery, basketball, baseball, soccer, cricket, and even made the chess team. When I was 10 years, all I earned was gold medals in wrestling. Always been a winner. Our film We (2021) has generated over 65 Nominations and Wins in film festivals around the world. In terms of hobbies, I watch a movie every day, I read a lot and usually go up north alone to watch the stars and sometimes go fishing alone, I love to walk and walk and walk, sometimes I try to discover places where people haven’t set foot, but it never easy to go to those places.

Q: Can you share with us any projects you have it the works or that you’ve wrapped up? Also, you have a great lineup of new productions you are producing, please share with us about those as well.

Mani Nasry – A: You want to know my secret, I guess that was the last question, lol. I am writing my next feature, I am a little in conflict with what story is most important to tell. One film is called I Can’t Breath and it’s about African American Lives, but I am not sure if it will be called that when its done. This film is about justice, anti-racism, it’s about giving freedom to the people. A black person is five times more likely to be stopped without just cause than a white person. There are over 1,025 people that have been shot and killed by police in the past year in the US. More than 56% of the US incarcerated population is being represented by African Americans and Hispanics. Between 1980 and 2015, the number of people incarcerated increased from roughly 500,000 to 2.2. million. The U.S. has nearly 25% of the world’s prison population. In 34 states, people who are on parole or probation cannot vote. In 12 states, a felony conviction means never voting again. More than one out of every six black men who today should be between 25 and 54 years old have disappeared from daily life. Incarceration and early deaths are the main drivers behind their absence.

Here is another secret if you now want to watch my first feature film We (2021), it’s Now available on https://vimeo.com/ondemand/wefeaturefilm.

We just release it and are now working on putting it on different channels. The film is about an identity crisis, coming from Afghanistan I lost touch with my language, customs, religion and culture. I wanted to find the right person to love but it got complicated when I got into relationships. Girls were from different backgrounds, different religions, and upbringing. I found my girlfriend with another guy or finding that the parents of my other girlfriend didn’t approve of my skin tone and made false judgement about me being Muslim. I wasn’t sure what I was, I didn’t practice religion at home or school. The public school never thought us anything about spirituality. This film deals with those circumstances, about aboriginals being thrown out of their land and forced out of their language and culture just I like I was. The nation of Canada’s base was built in a way that did not recognize a place in Canada’s future for Indigenous Peoples. I feel like the film industry in Canada doesn’t give people of ethnicity and backgrounds chances and opportunities. It’s all regulated and focused mostly on Caucasian roles, which takes me to head to America in the heart of the entertainment industry.