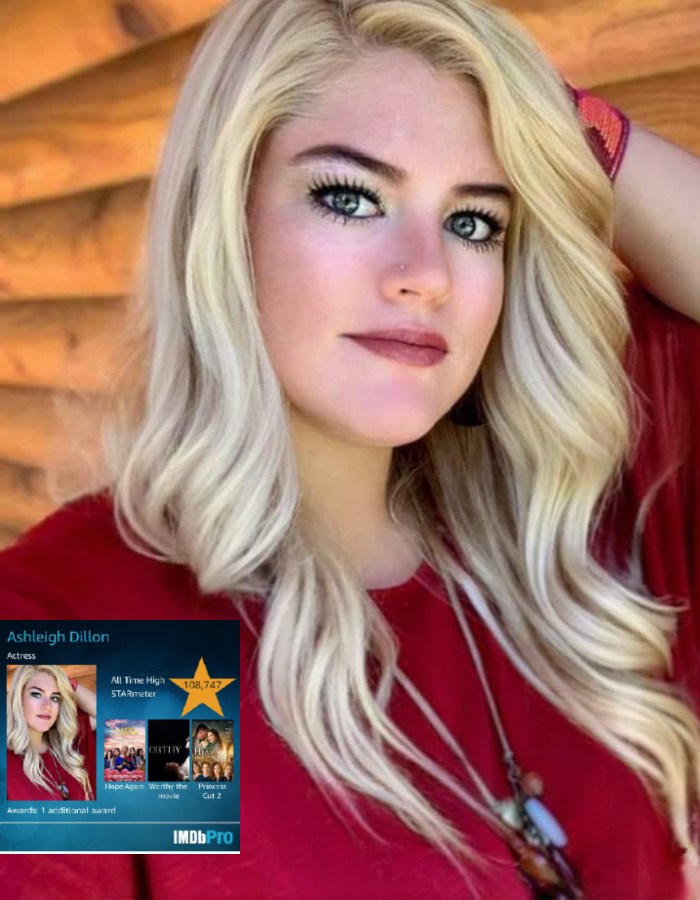 Ashleigh Dillon is an American Actress and Singer. She has started singing at a young age and followed her career in acting shortly after. Ashleigh is one of the rising stars in the entertainment industry and has some amazing news from film to music! Read our exclusive interview below with Actress & Singer Ashley Dillon:

Ashleigh Dillon – A:  I grew up in a small town called “Bedford” in Virginia. Bedford is like a hometown in the country. I currently still reside in Virginia but I travel all over for both of my jobs especially for acting and singing.

Q:  Ashleigh, you are a rising star actress and singer! What motivates you and inspires you to be the best at your profession and do you have a top 3 favorite actors, filmmakers or directors that you want to work with in the business?

Ashleigh Dillon – A:  Acting is not just a job for me. I am a believer in God so acting is not only enjoyable but is also a way for me to use my talents for Christ. My goal is to encourage and  inspire others through the work I do. I started into the industry by a friend of mine who started up a group called “Christian Casting”. From there God has opened many doors and blessings for me and for that I am so thankful. I always thought it would be cool to act with Gal Gadot. I loved her character in playing in Wonder Woman. I hope to work others in the future honestly there are too many to mention in the faith based and regular films that I would love to work with soon.

Q: In film, what would you say is your fav genre in roles you play( Drama, Comedy,Action, a little bit of all)  ?

Ashleigh Dillon – A:  I would have to say I love doing all different genres in the roles I play. When I act, I put myself in the mindset of the characters by finding similar things we have in common. This helps me to portray the character more accurately.

Q: When did you start singing and if you could select any celeb to do a music collab with, who would it be and why ?

Ashleigh Dillon – A:  I have been singing and acting since about age five. I would always be the kid who would sing and dance constantly and at other times I was constantly playing pretend. As I grew older, I got more involved with both acting and singing . As far as singers, it would be cool to sing with Lauren Daigle, Carrie Underwood, and or Dolly Parton. They are awesome singers and their voices are incredible. I am newer into the industry side of things as I just started in 2019. I auditioned to the Academy of Dreamers with the band “Consumed by Fire” (Ward Brothers) and through Child fund International. They have been a huge blessing in my life and also helped me release my first single called “Free”. My song shares how dark my life was compared to how much light is in it now. At one point in my life I felt like I was never enough and I was so unworthy. These were all lies as we all have a purpose in life and we are all worthy of God’s love.

Ashleigh Dillon – A: I have worked in nursing for many years before I started into the entertainment industry. I love to help and inspire people so both jobs are rewarding in that way. I am a down to earth country girl who loves to fish and hunt but I also have a nerdy and classy side. I was pretty athletic growing up. Volleyball, Tennis, and Snow Skiing were some of my favorite sports. Also, I loved drama and chorus. I am also a wife to a loving husband and a mom to two beautiful little girls who are my world. All of my family I’m extremely close to and love them all so much. I wouldn’t be anywhere without them and everything my family has done for me, my husband and girls. I value my friends also because they are there through thick and thin with me. All the way around I am truly blessed what God has given me. Now I want to give back in return.

Ashleigh Dillon – A:  I have been blessed with many projects the past two years. I started out in “The Princess Cut” series which was one of my first times being on set. I was able to record in Wisconsin for a track and music video with a special friend of mine. I recorded my first single “Free” in Nashville this past year. I just wrapped up a film called “Hope Again” that my song “Free” is in and also I wrapped up a film called “Recollection” which I have one of my biggest roles so far in. I have many other projects from there that I have been apart of and have some more planned for the future.  I wouldn’t be able to do any of this without my family’s support and my God opening doors for me. I feel completely blessed and excited for what is in the future.

Ashleigh Dillon – A:  You can always search me on Google but I also have most social media accounts.