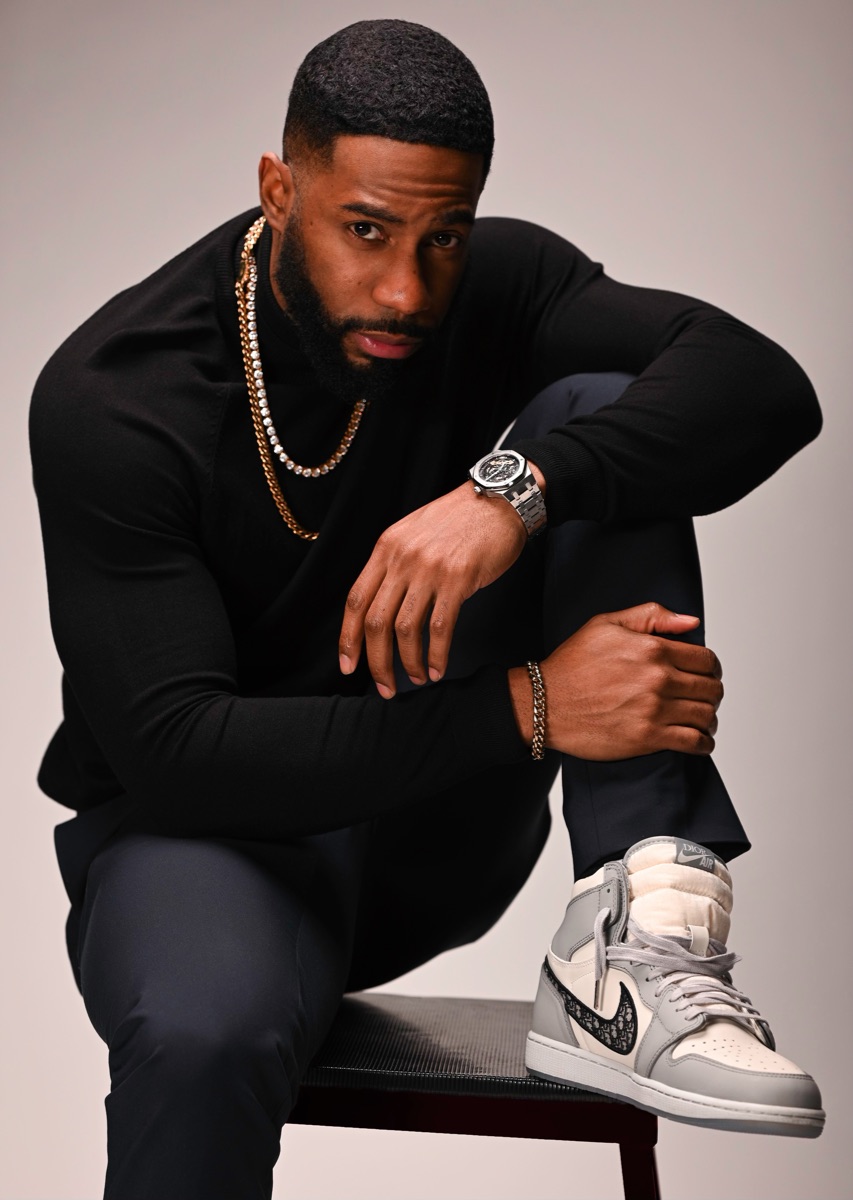 Jeremy Burnett is a Trinidadian-American Actor most known for his recurring role on the popular TV-Shows ‘Limitless’ & ‘Elementary’ on CBS, and ‘The Family’ on ABC. Jeremy has been inspired by the greatest in the industry and is determined to make his mark! Read below our exclusive interview with Actor Jeremy Burnett:

Q & A WITH ACTOR JEREMY BURNETT

Q: Jeremy, you are known for your roles in Person of Interest (2011), Jessica Jones (2015) and Blindspot (2015)!  What motivates you and inspires you to be the best at your profession in acting and do you have a top 3 favorite actors, filmmakers or directors that you want to work with in the business?

Jeremy Burnett – A: I’ve always been the type to work hard at the things that I love. Naturally that always leads me to work on my growth and strive to be the best I can be and when I see somebody at the top or doing something and I’m like why not me. Let me give it a shot.I have the utmost confidence in myself, my abilities and where I’m at with my abilities, meaning that I know that I’m uber talented, but I also know that I still have things to learn, things to work on, things to mold, things to do when it comes to my craft ..

Recently I’ve been inspired by the Kanye west documentary… Also I tend to get inspiration from everything around me, music, anime, watching other artists, like Zendaya in euphoria WHOA…. just anyone doing the best in their industry. Drake, the late great Kobe Bryant, the people around me striving for their goals, people like my mother, my bonus moms, my close friends with clothing lines, my acting tribe, music,etc…

My top 3 actors are Denzel Washington, Leonardo DiCaprio, and I could name 10 more. I don’t necessarily have a top 3. I would love to work with Jordan Peele, Ryan Coogler, Denzel, Christoper Nolan, Matt Reeves, Mimi Leder (again), James Gunn, Taika Waititi, NIa DaCosta, Issa Rae, Adam Mckay, E.Y.D Tabitha & I could go on and on.

When I get into something I love, I get obsessed and energized, so when I began to truly love acting, I STUDIEDDDDD!!! I watched every performance by every actor that won an award that I could find. I watched all the movies that were the best of all time. I watched every inside the actors’ studio interview that I could find. I figured out which actors I loved to watch every movie they made. Every book that was written about James Dean, Marlon Brando, Eleonora Duse, Sidney Poitier, and Cicely Tyson I read. Every acting book I devoured, I became obsessed, and I think when you do that, you learn so much. If you can apply it, it kind of gets in your DNA and you just keep working that mamba mentality. I think I’ve always had that Kobe just defined it for me.

Q: Jeremy, what is your favorite part of acting ( rehearsing, being on set, red carpet viewing, all of it) ?

Jeremy Burnett – A: I would say all of it in regards to the craft. I love rehearsing because it is so vital to the process of acting. It’s integral to finding out about the character you’re playing, and I love to explore my character’s life, his likes and dislikes, pov, relationships, etc., and also I love to play. You have a huge opportunity to find something that you might not be able to find any other time. And figuring out what’s going to get me where I need to go as an actor, how do I connect with this character, this situation.

I also love the journey acting has taken me on. I’ve learned so much about life, human behavior, and people, and I’ve been fortunate to meet some great people as well. I also love being on set and have learned to never take that for granted, because, perspectively, a lot of the things some people take for granted, others would do anything for that same opportunity.

A lot of people don’t talk about the struggles of the journey, not working for months or years and having people ask how the acting “thing” is going, or just not knowing when that next audition or gig is going to open. So I’m incredibly grateful when I do get the opportunity to be on set, and I love that part of acting. But I also make sure to enjoy the downtimes, trying to balance the lows and highs. In regards to rehearsal, I love to rehearse with music, pictures, running around the space, trying the scene different ways, getting really nitty-gritty and creative. It’s like being a kid again and I love it. From rehearsal, I want to be able to create characters that stand the test of time.. shows and films that stand the test of time, that people can watch 10/20 years from now and still appreciate them.. That’s one of my favorite parts of acting—being able to create something out of nothing that has the ability to transcend time. from the mind to reality…

Q:  Many of the top Hollywood Actors have a point in time where they start their own production company. Do you see that for yourself in the future?

Jeremy Burnett – A :Absolutely. I think it’s a great way to kind of take control of your career and also, I would love to put on some of the people that I’m coming up in the business with who deserve shots. Plus, I want to be able to make films and TV shows that I want to make and have control over that. Like Dwayne “The Rock” Johnson, I also want to be able to make projects that I may not necessarily be right for but believe in. I feel like there are so many stories that need to be told. Sometimes I want to do things my way.

Q: You have recently starred FBI: Most Wanted CBS TV-Series as the role of Ollie! How was your experience on set and filming ?

Jeremy Burnett – A: It was an amazing experience. First of all, being a part of a Dick Wolf production is a blessing in itself. He’s a staple in the entertainment industry. But the experience was one of the most collaborative that I’ve been on. Being able to work with a director like Ken Girotti and actors like Julian Mcmahon and Roxy Sternberg to make sure things are working from every angle is always a blessing. When everyone can have some input, take suggestions, and figure out this puzzle of a show, that’s a major grace. Everyone’s voice was heard. I think that’s an important part of any project because there are so many hands that need to make it all work, not even just the actors. The crew is highly important and at times they don’t get enough credit… Also, the character of Ollie had a lot of depth and substance, things that I could play with in regards to his story, his guilt, and his emotional depth.

Q: Do you have any special shoutouts to talented people that you have worked with and have contributed to your success?

Jeremy Burnett: Allison, Wendy, Darlene, Jabbar Walker, Adams, E.Y.D Tabitha, my acting tribe, Donnie Wahlberg (a huge help my first time on set, it could have been a disaster) Meagan Good , Bob Krakower, Ted Slurberski, Larry Moss, Jean-Louis Rodrigue, Kristof Konrad, Jerry K, the pew, and I’m sure there will be more because I don’t plan on stopping anytime soon.

Q:  You are known for your roles in action, crime and drama genre films and series! As an actor, What would you say is your fav genre in roles you play (Drama, Comedy, Action, Thriller, a little bit of all)?

Jeremy Burnett: A: I would actually love to do more comedy or dramedy. I think I’m funny, but yeah, instinctively I love a good crime thriller, so I want to do something classic that will be remembered for years to come, like the classics like Heat, Scarface, Paid in Full, The Wire, etc. I truly want to be part of projects with complex characters because, at the end of the day, humans are so complex and I think it’s beautiful when that can be portrayed truthfully on the screen. People are so complex. Nobody is just one thing or one way. We are all different people around our friends, then different around parents, then different alone, then different in certain situations. You’re not the same person when you’re waiting in line at the supermarket and the same person when you’re in the supermarket and on a time crunch; different stakes, or God forbid, your life is on the life or someone close to you is.. The things you might do, might shock you.. I love figuring that out and piecing it together. And of course, a superhero movie is definitely on the agenda somewhere down the line.

Jeremy Burnett – A: I’m a book nerd, I love to read and I’m always reading something whether it be to stretch my mind or imagination, stretch my dollars in regards to investing, a great autobiography or biography. I love to learn from others who came before me, achieved their dreams and left a dent in the universe. That’s essentially what I want to do, leave a dent in the universe.. I was here..when I leave this earth I want to be able to say I did it my way and that I strived to achieve everything in my heart…….