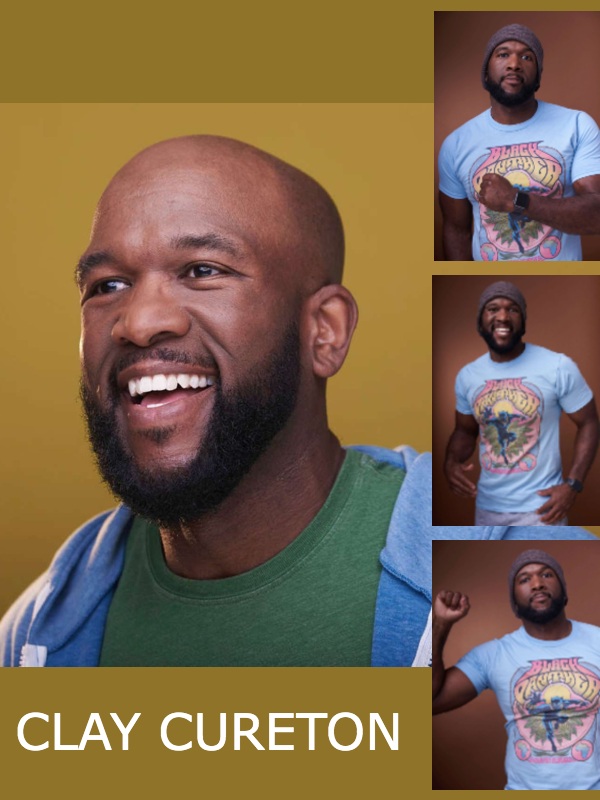 Clay Cureton is a Talented American Actor, Writer, Producer, and CEO of Clay’s Way Productions. Clay is making his way up in the entertainment industry with great talent and drive! Clay currently has some amazing film projects lined up in the works. Read below our exclusive interview with Actor Clay Cureton:

Clay Cureton – A: I am originally from Long Beach, California, born and raised and I currently reside in Bellflower, CA.

Q: Clay, you are an actor making your way up in the industry and founder & CEO of the production company, Clay’s Way Productions. What would you say motivates and inspires you to be the best at your profession?

Clay Cureton – A: I’m motivated and inspired for that matter, first and foremost by the people closest to me my mom, who taught for over 30 years in the Los Angeles School District, my older sisters, Anita Crump and Dr. Alicia Gwynn, both of whom are incredible women and leaders in their professions. And that’s just to name a few. So I guess you can say it’s in my DNA, I’m wired to compete and strive to be the best at whatever I do…

Q: Do you have a selection of top 3 favorite actors, filmmakers or directors, that you admire and want to work with in the business?

Clay Cureton – A: Wow, that’s a tough question because it’s just too many talented people in each all 3 of those categories, it’s tough to narrow it down to 3. I’ll give it a shot though. As far as actors go; I’ve have to start with the Icon/the man, Denzel Washington, he’s arguably one of the best to ever do it. Then I’m a huge fan of Benicio del Toro, I think he’s dope. And then it’s a toss-up between Meryl Streep, Viola Davis, Helen Mirren or Taraji P. Henson. For my money you can’t go wrong with either one of those ladies, they’re all phenomenal. As far as directors go, right off the rip, I’d love to work with Ava Duvernay, Ryan Coogler, and/or Antoine Fuqua or Christopher Nolan and I also like Quentin Tarantino.Now for producers, I’ve always been a Steven Spielberg fan, I think Will Smith is underrated and then I’d round it out again with Antoine Fuqua, are you noticing a theme here?

Q: As an actor, what would you say is your fav genre in roles you play (drama, comedy, action, a little bit of all)?

Clay Cureton – A: That’s easy I like them but if I had to choose one I’d have to say drama because there’s nothing like playing a bad ass bad guy or anti-hero.

Q: Share with us something people may not know about you. What hobbies or other secret talents you have and or like to do in your spare time aside from acting?

Clay Cureton – A:: So I’m passionate about a lot of things, but most people may not know that in addition to acting, I’m also a music producer I love creating and writing music, voiceover artist. And some of my other hobbies are fitness and training mixed martial arts.

Can you share with us any projects you have in the works or that you’ve wrapped up? Also you have a great line up of new productions you are producing, please share with us about those as well.

Clay Cureton – A: Let’s see I’ve recently wrapped a pilot for what I think will be a really cool and fun family show that is sci-fi based unfortunately, I can’t say much more about it right now and I’m also in the early stages of shooting a black based horror/comedy in the vein of Get Out, that I can’t say much about either. And other than that I’m collaborating with some incredible artists (singers, rappers) on some music projects that hopefully you’ll be hearing really soon…

Clay Cureton – A: Well, as you know I’m with a really awesome talented agent, LaTonja Sutton, who runs Arnay Talent the agency I’m with and she’s revamping all that for me so stay tuned I’ll keep you posted. In the meantime you can find me on Instagram @claytheactor_1 for now…