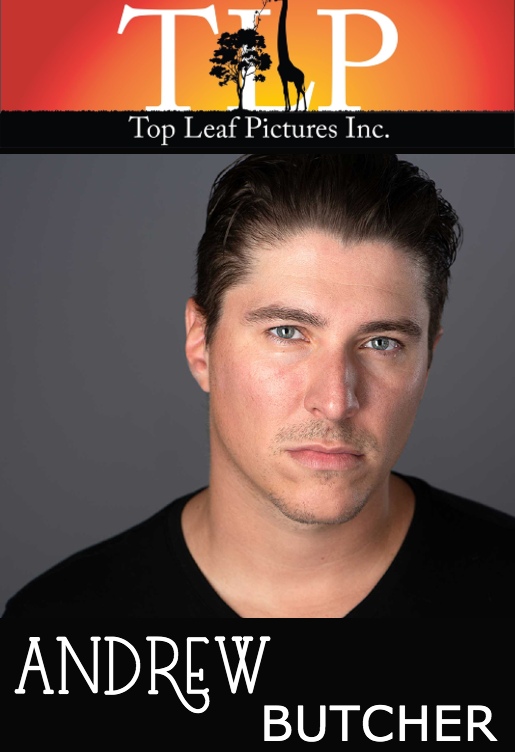 Andrew Butcher is a professional Actor, Screen Writer, Director, Singer, Producer with Top Leaf Pictures, and Stunt man for many TV-Series and popular Movies such as Return of Xander Cage (2017) ft Vin Diesel. Andrew has also been featured in many top brand commercials and is also known for his film roles in Sonny Nites is the Best There’s Never Been (2019), Letterkenny (2016) and Kidnap Capital (2015) . Read our exclusive interview with multi-talented Actor & Screenwriter Andrew Butcher:

Andrew Butcher – A: I grew up in Cambridge, Ontario, Canada, and currently reside there now. I’m in and out of Toronto weekly and often daily for work as a stunt performer and actor. The commute to and from has never been an issue for me. In fact, Toronto’s extreme rush hour can be a great time to do all my thinking – or in a better word… writing.

Q Andrew, you are a multi-talented actor, screenwriter, and producer with Top Leaf Pictures! What motivates you and inspires you to be the best at your profession and what do you love most about filmmaking?

Andrew Butcher – A: I was raised by a couple of industry players. With credits as an actor, director, writer and producer, my dad is arguably one of Canada’s busiest stunt coordinators. My mother’s a former talent agent with several credits as both an actor and stunt performer. It was only natural that I endeavored to develop a career in film. The same goes for my two sisters as well. We’re all artists in the industry in our own respects.

My family inspires me. My eagerness for solid, well-written, television inspires me. My love for bringing authenticity and realism to a fictional story drives me. To be the best is subjective. However, I will continue to work and be the best at it because I don’t let up. I’m motivated to grow and work hard every day… with the expectation of a good beach day. They can be few and far between where I’m from.

Q: Can you tell us more about Top Leaf Pictures and what kind of films the production company is producing?

Andrew Butcher – A: My dad and I opened Top Leaf Pictures when we decided to shoot a short mockumentary called Sonny Nites is The Best There’s Never Been (on YouTube and Vimeo), written by me and directed by dad (Randy Butcher). Sonny Nites is a low-budget adult comedy meant to showcase my humor, acting and my songwriting, and I hope it brings joy to whoever desires to kill a half hour of their life. 🙂

My dad and I discuss the future of Top Leaf all the time, but are uncertain of the next project. Either way, we have several pilots written, and projects prepared for development. From comedy to thriller to action, we’re preparing to pitch our material this Spring.

Andrew Butcher – A: Does anyone say ‘no’ to this question? I feel like saying ‘of course!’ Though who has only three?

I’ve been a fan of screenwriter/director Todd Philips since Road Trip, which I watched an embarrassing number of times in my teens. Then came Old School, and all that I thought I knew about comedy felt like history… To me, Old School was the way comedy was supposed to be executed. Hangover and Joker speak to Philips’ genius. And though I favor many writers and directors, I often feel as though Philips and I share a similar creative mind.

I’m a fan of stand up comedy. Bill Burr sits at the top of my list of favorite comedians. Though he may be the popular choice nowadays, I’ve been listening to his podcast for six years and watch his Netflix Specials every time I need a kick of something I already know its gonna be a solid hour of time perfectly wasted. Would love to work with him in some way, shape or form.

For my third and final, I have no one. There are too many on the list. I wanna work with the greats, however, just as badly, I wanna work with passionate, emotionally driven filmmakers wherever they may be in their careers. And atop all that, working with my dad, my sisters, and even my mother has been a great pleasure in my life, and I hope to continue working with them for decades to come.

Q: Being a pro stunt man in many films, you certainly are skilled for action movies! As an actor, what would you say is your fav genre in roles you play( Drama, Comedy, Crime, Action, a little bit of all) ?

Andrew Butcher – A:As an actor, I do a bit of it all. As a stunt performer, I tend to do a lot of acting and action in the same scenes. In my small Toronto based community, it’s not always easy to find stunt guys and gals with acting hops, so it’s where I find a large amount of my work. However, I do lean toward comedy. I have a high energy. I’ve been something of a clown for as long as I can remember. And I think I’m pretty good at all of comedy’s different variables, like writing, and timing. There’s nothing like making people laugh.

Andrew Butcher – A:Other hobbies include singing, songwriting and playing guitar. I first picked up a guitar 20 years ago and haven’t looked back. It’s been a hobby and has become something of a habit for me, as well as a portion of what makes up my career as an entertainer. I’ve written an album, as well as a four song EP (EP under the name Sonny Butcher). I’ve performed live all around, including Nashville and Los Angeles. Other hobbies include a longtime, deep love for skateboarding and a more recent love for cooking.

Andrew Butcher – A: I do a bit of everything, but I do a ton of driving in dozens of car commercials every year, which tends to be the majority of my earnings annually. When a commercial states at the bottom of the screen that a professional or precision driver performed the driving on screen, they’re often talking about me. In just the Fall of 2020, I shot Ford, Subaru, Hyundai, Kia, and many more. I have Lexus coming up in two weeks. Just wrapped several stunt days on Man From Toronto starring Kevin Hart and Woody Harrelson which just wrapped in Toronto, thanks to a stellar stunt crew and my coordinator.