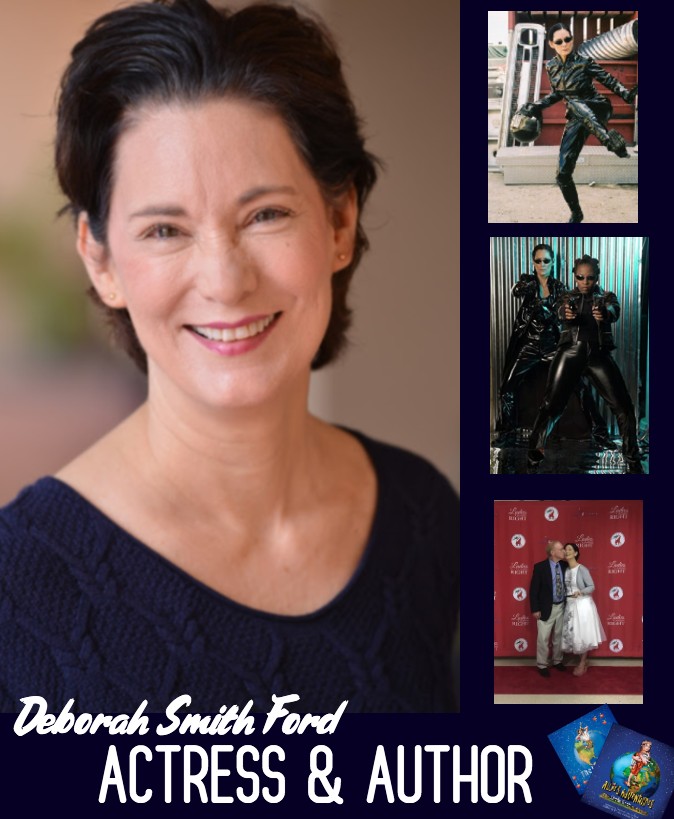 Debs Ford- A: I was born in Sodus in Upstate New York and lived on an apple farm in Wolcott. I didn’t live on the farm very long, but it was a strong influence that inspired me in much of what I’ve accomplished in my life (my family and books). As an older child, into my early adult years, I helped on my Uncle Jim’s dairy farm. That too was a positive influence, one everyone should experience. My new home base is in SW Florida.

Q: Deborah, you are an experienced award-winning actress know for your roles in S.O.L.I.S., Hanging Millstone, Love Song and Power, Fostering Dad and Every Second Counts. Your book series ‘Allie’s Adventures ‘ has also launched into a whirlwind of success with the recent award as Woman of Distinction in Creative Arts, 2019-2020 given by Story Monsters Ink, another grand accomplishment! What would you say really motivates you and inspires you to be the best at your profession?

Debs Ford- A: Actually I did not begin in the world of entertainment until later in life (well, past 40)! I originally trained in the areas of dental and veterinary assisting, elementary education, shuttle missions work in third world countries, active in church and a full time mom. My acting training began after our two daughters left the nest.

Getting motivated for me means being prepared no matter what I do. That’s why after obtaining my B.S. degree I returned to “the books” to study modeling and acting. I worked for almost 10 years behind the scenes in film and television. One day I got a taste of acting when the actress was a no-show, and I replaced her. Another motivation was when I realized working 24/7 for less money vs working less hours in front of the camera for MORE money is a very good thing!

Of course, like all professions there are pitfalls, but you have to see the glass half full or the glass runs dry. Soon I was able to pick and choose what I wanted from the biz – celebrity impersonating was one of them.

I have been a celeb or character lookalike to that of The Matrix’s Trinity, Audrey Hepburn, Mary Katherine Gallagher, Kate Jackson’s Charlie’s Angel, and others. My writing picked up as well. I still enjoy working on both sides of the camera. It’s the process of the total package of filming that I enjoy plus life long friendships/family gained along the way.

Q: As an actress, what kind of roles do you usually go for( drama, comedy, crime, a little bit of all) and do you have a top fav 3 selection of people in the industry ( filmmakers, producers, directors, actors ) you admire and that you want to work with in the future?

Debs Ford- A:My film/TV roles initially leaned toward the drama side, and I was often cast as the mom, businesswoman and teacher types. Since it’s been over two decades that I’ve been active in the biz I have “matured.” With such maturing comes different roles. Now I seem to get the more sinister/evil, crazy and grandma type roles – I wonder why? I’ve been blessed to work with a few “big names in the industry.” Some include Tom Logan, George Lucas, Larry Clark, Sydney Pollack, John G. Avildsen, Harrison Ford, Sean Connery, Kelly Preston, Jeff Goldblum, Eddie Murphy, Robert Loggia, Cher, Tom Lester, Danny Glover, Joe Pesci, Brett Rice, Rene Russo, Gary Busey…. there are many more actors I’ve worked with who are not necessarily big names but are professional and a delight to work with!

Q: Can you share with us more what Allie’s Adventures book series is about ?

Debs Ford- A:The series takes you on adventures as seen through the eyes of the main character, Allie Jean. So far there have been stories about farm life, missions work, “Hollywood” – celebrity impersonators and on set shooting of a movie, with more to follow!

The Allie book series, currently consisting of six books, was never intended to be a series. The first book, “The Little Apple,” is geared for non and early readers, and it was to be the only book.

It was inspired from two sources – the apple farm I grew up on and the “book” I wrote in college as an assignment when studying to be a teacher.

Due to the first book’s popularity and multiple dares, I wrote another and another… of her adventures. I try to practice what I preach, “Write what you know, and when you run out of what you know, make it up!” Thus, my books are a combination of real life and fiction.

Debs Ford- A:﻿Honestly I thought I would never be involved in any film or TV projects again. Attending castings are not my favorite thing in the world, although this durn virus allows us to attend them online. Instead, I gravitate more to my writing.

Lately though from word of mouth, great scripts and the wonderful people I’ve worked with it has been difficult turning down some of the projects. A few of them include: “Miss Bonita Springs 1967,” “Dog Gone Fun,” “Love Song & Power,” “S.O.L.I.S.,” “Higher,” and more. I love it when everything comes together, and lately such projects have.

Q: Can you tell us something we may not know about you? Any hobbies, passions or other secret talents you have and or like to do in your spare time?

Debs Ford- A: Number one in my life is my family. My husband is a veterinarian who owns and operates, along with his partner and large staff, an amazing animal hospital. In the early years, I used to work there, South Trail Animal Hospital. In addition, we are very proud of our two grown daughters and three grandchildren, and we keep in touch as much as possible.

Interesting and fulfilling for me has been volunteering as a pageant judge at beauty pageants in New York and Florida. Too, the United Film & TV Artists, Inc. (UFTA) is yet another way of helping others, and I have been an officer of that organization since its inception over 15 years ago.

On the acting side, I have converted part of a building behind our home into a studio where many film and television projects, photoshoots, and castings have been, and still are, held. By volunteering myself and the studio it gives opportunities to others in the biz who may not get a chance to experience the world of entertainment.

Q: What are your official sites on the web we can follow you on?