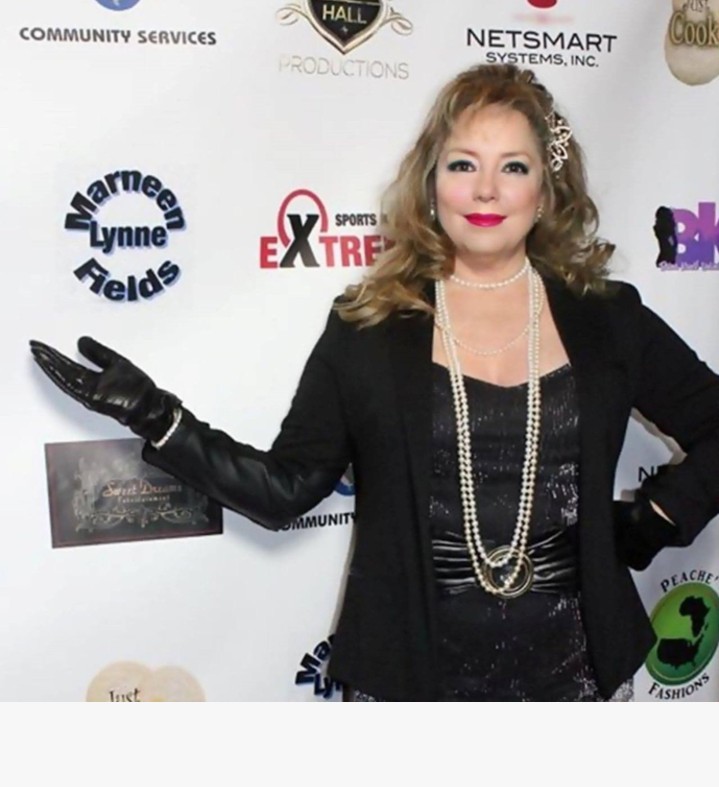 Marneen Lynne Fields is a Multi Talented Actress, Singer, Legendary Stunt Women, Writer, Producer, Director, and owner of Heavenly Waterfall Productions. Marneen was a legendary stunt women in the 1970’s-1980’s on set of some of the biggest Hollywood Movies directed by famous directors such as Clint Eastwood. Marneen has been respected in the industry and is continuing to make her mark with over 100 film credits, 16 Film Awards and 18 Nominations! We had the chance to interview the Legendary, Talent, and Beautiful Actress and Singer Marneen Fields! Read our exclusive interview below:

Marneen Fields – A: I was born in Minot, North Dakota, but have lived most of my life in the Los Angeles area, at the present time I’m living in Las Vegas, Nevada where I’m working on a new CD.

Q: Marneen as a talented actress, musician, and respected stuntwoman in the film industry booking roles on over 150 film productions and Primetime TV shows and always looking amazing on red carpet premieres, what motivates you and really inspires you to be the best at your profession? Do you have a top 3 favorite actors, filmmakers or directors that you want to work with in the business or that you have already worked with?

Marneen Fields – A:My career success comes from an inspirational, motivational, champion perspective that is laced with a lot of positive energy and focus. As a young class one advanced all-around college gymnast and one of three women in the United States to receive an athletic scholarship in gymnastics to Utah State University I read Olympic gold medalist, Olga Korbut’s book, Olga and even conquered some of her famous moves on floor exercise and balance beam like her back flip-flop from toe point and her amazing high back flip to chest layout. In the book she shared her thoughts about the competition being within and not with other people. I adopted that principle and ignited it as the torch I continue to carry today. This competition with self-concept is my main focal point as I continue to strive to do amazing things with the talent God gave me.

Clint Eastwood has always been one of my favorite directors and celebrities having had the chance to appear opposite him in a fight scene and being directed by him as the young stunt woman he punched (backwards with a half-twist) off the moving train in The Gauntlet into only a shallow layer of sand.

BI’m also a big Patrick Duffy fan who performed several dangerous high dives off bridges and out of helicopters for his Man from Atlantis TV series. To date, I’ve been the only woman photographed to perform his famous underwater swim on the series also. Last year I was interviewed by an author writing a book on Famous Women in the Water in which my high dives and underwater scuba and swimming work will be appearing alongside of Esther Williams.

Another favorite director of mine was James Garner who directed me in two episodes of his famous The Rockford Files TV show. I jumped feet first out of a jet at night onto a runway in the “Three Day Affair with a Thirty Day Escrow” episode after my seat catches fire. James himself pushing me out of the jet’s hatch in the scene. I also did an extremely difficult fall off the back of a motorcycle onto my stomach on hard gravel in the “The Return of the Black Shadow” episode.

Famous actors I’ve appeared opposite with as an actress and stunt-actress are also some of my favorites: Jeff Goldblum in the MOW The Legend of Sleepy Hollow as the young choir girl he teaches to sing; Dick Van Dyke in The Runner Stumbles as the sick nun he rescues and carries through the burning convent; Bruce Boxleitner in Scarecrow & Mrs. King, “We’re Off to See the Wizard” episode in the guest star role of Bruce’s girlfriend the real artillery Dorothy; and broad jumping over a huge hole on the upper level of a ship into the arms of Michael Caine in Irwin Allen’s Beyond the Poseidon Adventure while performing stunts for Academy award winning actress Shirley Jones.

Q: You’ve acted and done stunt work on Hollywood’s biggest movie sets, even Wonder Woman! What is one of the riskiest stunts you’ve ever done in film?

Marneen Fields – A: On the primetime TV show, Quincy, “The Depth of Beauty” episode I walked along the top ledge without a cable and jumped feet first (in the pitch dark night) off the towering First Interstate Bank building 62 stories high wearing only a pair of fluffy bedroom shippers with a small heel and a sheer negligee playing a suicide victim. I jumped into boxes about 25 feet down hidden within a small electrical alcove. That was a hair-raising stunt.

Q: As an actress what would you say is your fav genre in roles you play( Drama, Comedy, Action, a little bit of all), and what do you want to expand upon?

Marneen Fields – A:Great question Genie, and no one has ever asked me that before. I’m a creative original artist who loves to perform passionate and emotional works like my new pop-blues single, I’ll Never Kiss His Lips Again. I’ve done some comedy but enjoy writing comedy more than performing it. As for movies, I love the James Bond, Batman, Wonder Woman, and other big budget action adventure films. For the future, I want to expand upon composing and recording more pop-blues/soft-rock ballads with accompanying music videos as I consider myself to be a rock operatic performer at heart. As the author of the 5-Star rated, The Illusive Craft of Acting: An Actor’s Preparation Process (recognized by many in the industry as a Stanislavski and Chekhov methods of acting specialist), I’m open to being cast in any role a director would feel I’m right for. I’ve been a professional SAG actress for forty-four years this December.

Q: You have your own successful production company called Heavenly Waterfall Productions that you’ve recently expanded location now to Las Vegas, NV! Can you share with us some exclusive details about your production company? How you started it and what genre films does it produce?

My award-winning company was originally titled Heavenly Waterfall Song Publishing and Productions to publish my compositions and creative works to take my career to the next level with a top agency signing and the star level recognition for my creativity and talents that I’ve worked decades to obtain. The name of my company comes from my name, Marneen means Heavenly and Lynne means Waterfall. Today I go by Heavenly Waterfall Productions. All the productions are my creative property as the original artist, ASCAP composer, scriptwriter, author, director, and editor on each of them. Heavenly Waterfall Productions has produced several CDs of my original songs and music videos, a couple of sitcom pilots, feature-length screenplays, and numerous literary works.

Many more sensational works of mine are launching world-wide with Heavenly Waterfall Productions in 2021 and beyond!

To date my music, film, and literary productions have won or been nominated for forty-eight awards in music and film festivals orcompetitions around the world. Some of the awards I’ve won are:Best Dramatic Screenplay for Who’s Gonna Take Care of Me? from the Hollywood Dreamz International Film Festival; Performer of the Year from the EZWay Golden Gala Awards; Most Inspirational Song for Kathryn Davis: Take 2 at both the Las Vegas Fame Awards and the Hollywood Fame Awards; Legendary Stunt Woman of the Year from the International Action of Film Festival; 5 Best Pop Song of the Year awards for Release My Love from various music competitions; 5 Best Blues Artist of the Year or Best Music Video of the Year for Shadows from various film and music competitions; and Outstanding Comedy Script for Johnny Hawk a.k.a. Hard Nuts to Crack from the LA Comedy Awards, many more. For a complete listing of awards please see my IMDB page at the link below.

Q: EXCLUSIVE SECRET! What is something people may not know about you? Any hobbies or other secret talents you have and or like to do in your spare time aside from acting?

Marneen Fields – A: I’m a very advance spiritual and religious soul. Singing and composing music are my passions, with taking everything to the microphone in unique expression the ultimate challenge for me. But, in my free time you can find me studying and enjoying the word of God and spiritual and inspirational concepts. Christianity has become a wonderful life-experience for me, and it lifts my soul like nothing else. Jesus Christ takes my breath away and he is where my heart is.

I manage a Facebook page titled, God’s Miraculous Healing Powers and I’m planning to publish my first magazine issue of personal stories and inspirations in 2021. Many people have seen angels or been healed by God in life-threating moment and near-death experiences, I’m not the only one. I hope to bring increased faith to millions with these stories.

I’m severely hearing impaired with only ¼ the hearing a normal person is born with. I’m completely deaf in my left ear and half-deafin my right ear. I’m like Beethoven, and it’s a very challenging and devastating obstacle for a performance artist and a composer to livewith on a daily basis. I would give anything to have my hearing. I haven’t heard in stereo since I was eighteen years old and I watch everything in closed caption.

Q: What are some projects that you’ve just wrapped up recently or that you’re currently working on now? Z

Marneen Fields – A:I have my first two spiritual and religiously inspired songs launching world-wide in 2021 A White Dove of Love, and Christ Knows What’s in My Heart, along with a new CD of passionate love ballads my fans have come to love from me.

I’m working very hard to try and get my award-winning screenplay Who’s Gonna Take Care of Me? a.k.a. A Lost and Found Gem into the hands of some Academy-Award winning caliber actress to do something for the mentally ill who are homeless and their families.

I have two biographies about my life and career that I’m looking for a publisher for. Cartwheels & Halos: The True Marneen Lynne Fields Story – The story about how I rose to the top of the Hollywood stunt world in the 70s and 80s and was on the brink of becoming a famous actress when a tragic twist of fate involving a near-fatal car accident sidelined my career for nearly twelve years as I underwent a series of life-threatening abdominal operations. With a theme of “behind every dark cloud there’s a silver lining,” I found my true calling in the wake of my childhood dreams of music.

The second book is my filmography titled, Rollin’ with the Punches: An Examination of the Stunt and Acting Careers of Marneen Fields. In 1985 I was coined Hollywood’s Original Fall Girl and awarded a Fall Girl license plate by famous stunt-coordinator J.P. Bill Catching and the Stuntman’s Association, a title that sticks with me today. People will love reading my personal accounts of what my life was like back then and the high demands placed on me as a young champion gymnast and pioneering stuntwoman.

Q: What are your official social sites on the web we can followyou?

Marneen Fields – A:You can find the list of films I’ve appeared in and some great photos on the IMDB at, http://www.imdb.me/marneenfields

You can find my production company at, http://www.heavenlywaterfallproductions.com

You can watch some of my videos at, http://www.vimeo.com/marneenlynnefields

You can buy my 5-Star rated The Illusive Craft of Acting: An Actor’s Preparation Process on Amazon at this link