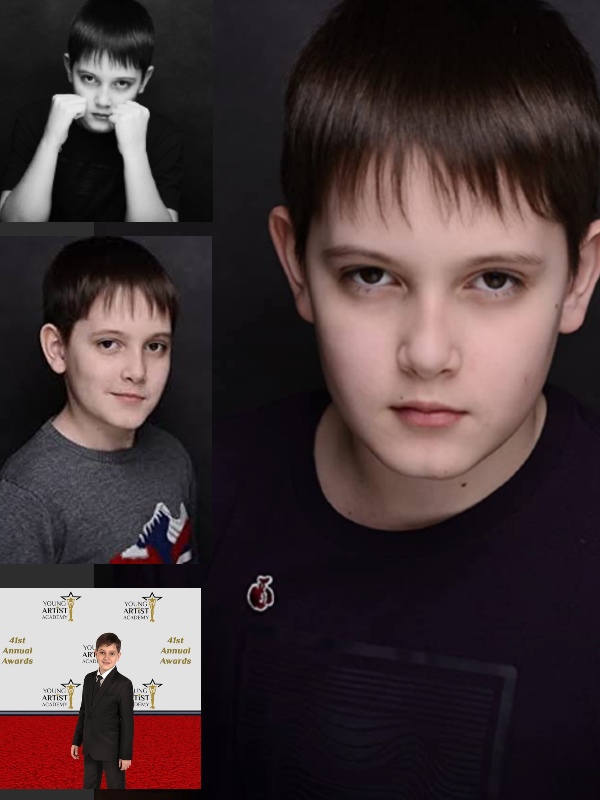 Dobromir Mashukov is a talented award-winning international actor rising to great success in the entertainment industry. Dobromir born April 29, 2009, is the son of Ilya and Anastasia Mashukov, accomplished family business owners. At such a young age, Dobromir has already been apart of 3 different films Acceleration (2019), Goodbye, America ( 2020), and The Comeback Trial ( 2020) starring with Hollywoods most legendary A list actors including Robert De Niro, Tommy Lee Jones,Morgan Freeman, Zach Braff, and Dolph Lundgren. At the age of 7, he received his first award: Laureate of the first degree at an international theater festival. Dobromir continued winning awards in many theater & film festival awards including the Cannes International children’s festival award and making his way to Hollywood being nominated at Hollywood’s Honorable Young Artist Awards 2020. Dobrobir’s pro boxing & acting talent has caught the attention of Hollywood’s greatest actors & boxers including Sylvester Stallone and Mike Tyson. Despite his young age, Dobromir possesses a large number of skills including Martial arts, gun handling, car driving, horse riding, swimming, playing the guitar, ballroom dancing, various game sports. Read our exclusive interview below with Actor Dobromir Mashukov:

Dobromir Mashukov – A: I was born in a small town in Russia. I currently reside in Russia but I often visit the USA and Europe. I love being in Los Angeles. I have my favorite places.

Q: Dobromir, you are a young actor in the entertainment industry and you are rising rapidly in success booking films with Hollywoods A Listers already! What do you love most about acting ( rehearsal, performance, premiers)? ‘

Dobromir Mashukov – A: I absolutely love the whole process. When I get on the stage or set, I start breathing deeply and usually have butterflies in my stomach. The whole experience really excites me and I’m so grateful and honored that I’ve had such incredible opportunities to work with some of Hollywood’s finest. Cinema is magic that evokes indescribable feelings. I really love theater and the cinema. These are my passions.

Q: Who is your favorite actor or director that you admire and that you want to work with with in the future ?

It’s interesting for me to work with all the different directors because everyone has their own perspective and you can learn a lot from each and everyone. Since Rocky is my favorite movie I would love to work with Sylvester Stallone.

I also love boxing and I am pretty good at it… We could continue the series of films about the legendary Rocky. I even have ideas for a script.

Q What would you say is your fav genre of roles to play ( Drama, Comedy, Action, a little bit of all)?

Dobromir Mashukov – A: Each genre has its own splendor. I think the genre is not that important, it is important that the film is good and that the people like it.

Q: In the film ‘The Comeback Trail’, you play a boxer and you certainly got the attention of Morgan Freeman and Sylvester Stallone! How old were you when you started boxing ?

Dobromir Mashukov – A: In “The Comeback Trail” my role is pretty small, but you’re right, my boxing skills did catch the attention of the entire film crew.  Morgan Freeman, George Gallo, Richard Salvatore and many others. Everyone told me that I should stay in America and pursue a career as a boxer.  They called me a champion.  I am very grateful to them for their kind words.

I’ve been boxing since I was six.  Some people call me little Mike Tyson.  By the way, Mike Tyson is my favorite boxer.

Sylvester Stallone also praised my boxing skills very highly when he watched the video of my training.  I was then only eight years old.  We also had a joke sparring with Mr. Stallone, after which he gave me a knife from the Rambo movie.  It was one of the best days of my life.

Dobromir Mashukov – A:  In my spare time, I enjoy writing stories and scripts.  I also like drawing comics and creating different cartoons.  I love horse riding and playing a little guitar. Something people may not know about me is last year I created an animated project called “Scary Dreams”. The cool thing about this project is that it is based on real stories of real people having nightmares. I was able to recreate these nightmares but added a funny twist in the end. This gave people a different prospective and helped them accept their nightmares as nothing more than just bad dreams and nothing to be afraid of. The best part of it all is the project helped many people including myself get rid of the horrible nightmares.